Published by Victoriia Revenko on

This is a very flavorful and light borscht that is very common in the Southern parts of Ukraine. The use of fresh tomatoes, fresh bell peppers and khmeli suneli spice mix make this recipe outstanding. Make it for your family – they will love it!

First, divide whole chicken into several parts and was every part thoroughly under running water. Place the chicken into a pot, add water, cover with a lid and bring to a boil. Remove any foam that might appear on the surface. Turn the heat down to low and cook broth for around 2 hours. Add salt 30 minutes before the broth is done. Take the chicken out, separate the meat from the bones and cut bigger pieces of meat into bite sized pieces. Strain the broth.

Wash and peel your beets and cut them into thin strips. Heat oil in a skillet and add beets. Cook until the beets become softer, then add sugar, sprinkle with vinegar and cook for 5-7 minutes.

Cut onion and carrot into small cubes. Heat oil in a separate skillet and cook onion until it becomes translucent. Then add carrot and keep cooking for another 10 minutes.

Heat oil in a separate skillet on medium heat.  Add minced garlic and cook it until it becomes golden. Add cubed bell pepper and cook for another minute.

Bring the broth to a boil. Add cubed potatoes, and in 5 minutes, add shredded fresh green cabbage and cook for 20-25 minutes. Then, add the following ingredients in turns, bringing the borscht to a boil every time after you add an ingredient: first, add fried onion and carrot, then stewed beets, then fried bell peppers with garlic. Let it boil for 3 minutes, then add tomatoes, boiled chicken meat, khmeli-suneli seasoning mix, peppercorns and salt to taste. In a minute, add chopped green onion, dill and parsley, mix well and remove from heat. Let stand 30 minutes before serving.

When serving, add sour cream to every bowl.

Make this with Borscht Making Kit 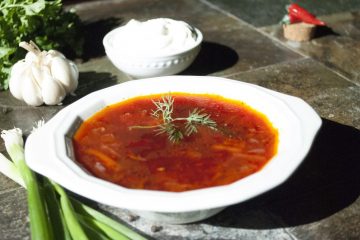 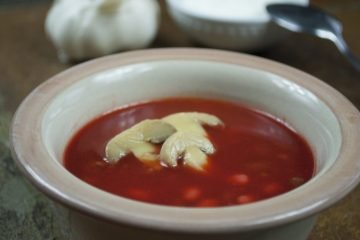 Borscht with Duck and Mushrooms

Thick and very flavorful, this borscht combines all around fan favorites: duck meat, fresh mushrooms and, of course, beetroot! Served with garlic and sour cream it’s one of the most aromatic borscht recipes ever. Place Read more… 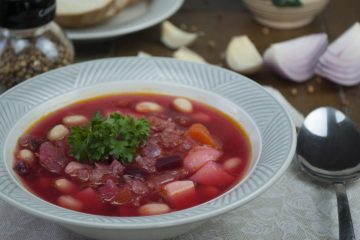 This borscht is packed with proteins! Brisket, chicken and beans make this recipe very filling and nourishing – exactly what you need on a cold winter day. Wash brisket under running water and place into Read more…

FREE SHIPPING ON ALL ORDERS! Dismiss